Where to stay in Barcelona is one of the most common doubts when visiting this city. It has several neighborhoods or areas and it can be difficult to choose the best option on the map

👉 To avoid those moments of uncertainty and stress, I present this post about neighborhoods in Barcelona, with the information you need and maps to be able to choose the area that suits you best

NEIGHBORHOODS AND AREAS OF BARCELONA

What are the main neighborhoods of Barcelona?

Below, you have a beautiful map with the most central areas of the city divided by colors.

The part that is considered the center of Barcelona is where the name of the city appears (between the Eixample and the Gòtic), which would be Plaça Catalunya and surroundings. 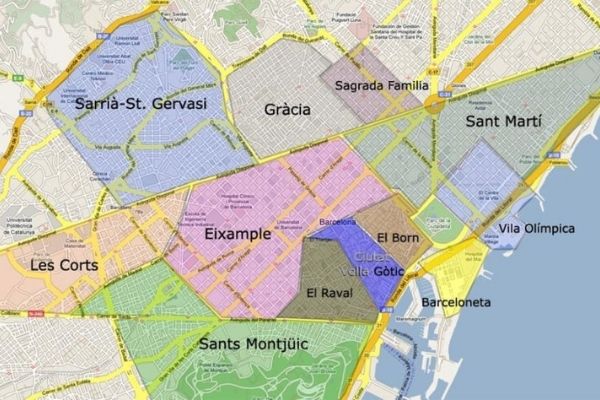 Below, and to complement the previous map, you will find a list of the different neighborhoods where to stay in Barcelona, and their main characteristics to help you choose:

It includes the Raval, Gothic, Born and Barceloneta areas and is the historic center.

It is full of bars and restaurants and it is where the town hall, the Generalitat, the cathedral and its respective cloister, the Liceo and a lot of winding streets with small balconies where plants and flowers hang and grandparents stick their heads out to spy. to passers-by.

It is also the most touristic area (and the most expensive to stay) and where many foreigners or exchange students live. La Barceloneta overlooks the beach and is the old fishing district, the houses and the charm of the time are still preserved.

For Barça fans, this is where the Camp Nou is located.

It is close to the Pedralbes Palace and the university area, and it is a quiet neighborhood that mixes a modern part with an old part full of charm. It is well connected by metro and bus.

Gràcia is very popular for its neighborhood festivals in August, each street chooses a different theme and is characterized and decorated by its inhabitants (as an example the header photo).

Staying around here is a good option as it has a lot of nightlife and is close to Parc Güell. Visually it is like a small town within a big city, with its plazas and grandparents sitting on benches watching time go by.

The streets of Passeig de Gràcia, Rambla Catalunya and the main works of modernism in Barcelona (such as La Pedrera or Casa Milà) are encompassed in this district. It is touristic but at the same time it has quiet and residential areas with gardens hidden in squares and bars.

It is a wealthy and quiet neighborhood of Barcelona, with stately and bourgeois houses and is part of the Tramvia Blau route.

Highlights: the Science Museum, the Reial Monestir de Pedralbes and the Torre Bellesguard.

A former manufacturing center, its industrial past left its mark on the architecture with long, tall brick chimneys. But don’t be fooled, it’s full of charming little streets and they have the best horchata in town.

Currently it concentrates new companies and technology, clear examples are the Agbar tower and the Forum.

A large part of the city’s theaters and some museums are located in this neighbourhood, the Palacio de Montjuïc and Carrer de Sants are also worth a visit, I recommend getting lost in the alleys that line the street.

Where IS IT BEST TO STAY in Barcelona?

If I had to choose where to stay in Barcelona, I would choose a point in the area marked in orange, which is the most central part of the city and has a lot of life.

In addition, it is well connected by public transport (metro and bus), close to the action (tourists, shops, bars and restaurants) and has charm (each area in its own way).

For security reasons I would try to avoid the Raval area, more than anything in case you return to the hotel at night. Also keep in mind that you smell like a tourist and this is usually extremely attractive.

👉 After the map, I tell you how to save on transportation and attractions

SAVE on transportation and attractions

If you are visiting Barcelona and want to save both on public transport (the city is very well connected by metro, bus and tram) and on attractions, I recommend these two options: the Barcelona Card and Hola BCN! card

With this card you will be able to use public transport unlimitedly (except the night bus), you will have free access to more than 25 attractions in Barcelona, and more than 70 discounts in museums, monuments and restaurants in Barcelona.

Apart from the places mentioned above, the Barcelona Card also offers discounts for the main tourist attractions of the city such as the Sagrada Familia, the Palace of Catalan Music, La Pedrera or the Camp Nou.

👉 You can buy the Barcelona Card in this link

Below you will find a table with the different modalities and prices:

You can use the Hola BCN! card unlimited on any public transport in Barcelona (buses, Generalitat Zone 1 railways, suburban trains, trams and Renfe trains in Zone 1) and is free for children under 4 years of age.

The only transportation that is not included are night buses (NitBus); but if you arrive in Barcelona by plane, you can also take advantage of it to go from El Prat airport to the city.

👉 You can buy the Hola BCN! card in this link

tours AND ACTIVITIES IN BARCELONA

Barcelona is a city that has multiple attractions: the architecture, the food, the markets, the bars, the history, the small alleys of the old town,…

So that you can get to know the city in depth, I’ll list some tours for different places in Barcelona. There are also some free tours; if you don’t see them, you can use the following link to see all the activities.

WHAT TO SEE IN BARCELONA

There are lots of different places you can visit in Barcelona depending on your tastes and interests.

Next, I describe some very nice places, but not as well known as La Pedrera or La Sagrada Familia. I hope you like them and enjoy them during your stay in the city!

The Santa Caterina market is a very peculiar place due to its colorful architecture, its history (it was built on top of an old convent) and its food.

Not only will you be able to buy typical products, but you will also have the opportunity to taste different dishes in the market bars. And in summer it is even better, since you can sit on a terrace to enjoy a good snack while you sunbathe.

It is a four-storey palace renovated by Puig and Cadafalch during the years from 1904 to 1906. The architecture stands out for being a mixture of Gothic and modernism with a touch of Islamic style.

The parts that attract the most attention are the tribune decorated with columns (in the photo); the staircase that has a handrail cut in stone; and the main façade that is adorned with busts and garlands.

The location of the Palacio del Varon de Quadras is very central (in Diagonal with Paseo de Gracia) and is well connected by public transport. In addition, you can take advantage of the fact that you are in the area to visit the Casa de les Punxes, which is located a few meters from there. Casa Rocamora is an Elizabethan mansion that is preserved in perfect condition. When you visit, you can walk through the different rooms decorated with period furniture and enjoy the different exhibitions.

On a permanent basis, they exhibit paintings by Ramon Casas and pieces from different collections from between the 7th and 20th centuries; In addition, clothing exhibitions by famous designers (such as Balenciaga or Gaultier) are held regularly.

Have a great time in Barcelona and enjoy your stay!!!